Public infrastructure involves planned maintenance and repairs, occasional alteration or expansion, and in some situations rehabilitation or replacement of public improvements in order to meet the goals, needs, and expectations of the community. When a community addresses aging and deteriorating infrastructure in a practical and timely manner, it can result in significant cost savings for future residents and community members.

An infrastructure report card is an assessment of the current condition of the existing public improvements of a community. It is a snapshot in a moment of time: it does not evaluate community needs and priorities nor is it an in-depth assessment. It is a data-driven, objective review of our public improvements that grades the existing state of the infrastructure in a city on an established scale from Exceptional ("A") to Failing ("F"). The grades are selected based on criterion developed by the American Society of Civil Engineers (ASCE) guidelines that have been consistently used for almost 2 decades. 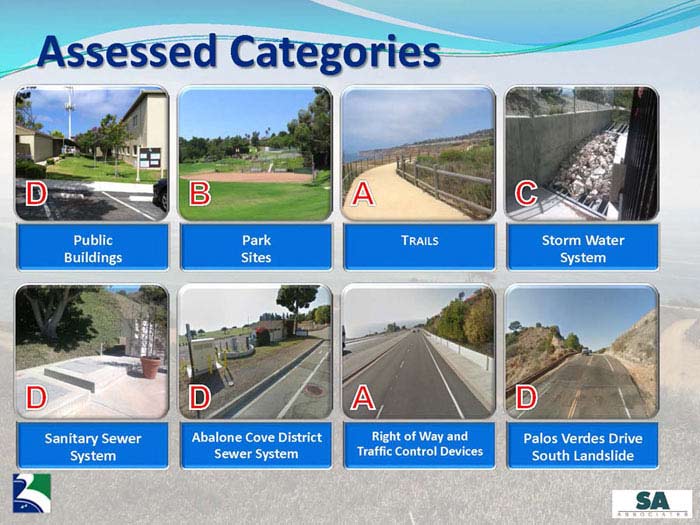 This report card is a summary of the grading ascertained for all known RPV public improvements. It was prepared by SA Associates, a consulting engineering firm, located in Arcadia. The President of the firm has been involved with the ASCE Infrastructure Report Cards developed for Los Angeles County and California. The report card is tailored on similar report cards prepared for the counties of Los Angeles, Orange, and San Diego. The backup documentation of the condition of each item is available on the assessed infrastructures page. (SA Associates indicates that RPV is the only local municipality that the firm has prepared a report card and perhaps one of the first non-urban California cities to do so.

The public improvements graded include:

On February 10, 2014, the City Council received and discussed the RPV Infrastructure Report Card.