The City of Rancho Palos Verdes began planning for a non-motor vehicle transportation circulation system for pedestrians, equestrians and bicyclists, as early as the adoption of the City's General Plan in 1975. In the early years after the city's formation, it was recognized that trails are an integral part of the City's circulation system and play an important role in contributing to the successful interaction of residential, institutional, commercial and recreational zoning districts within the city, while encouraging passive recreational and fitness opportunities, as well as fostering appreciation of the City's abundant natural resources.

As such, on November 27, 1984, the City Council adopted the City's Trails Network Plan intended to serve as an advisory tool for the City decision makers for the implementation and funding of City trails. As a means of implementing the Trails Network Plan, on January 22, 1990, the City Council adopted the Conceptual Trails Plan (CTP) and Conceptual Bikeways Plan (CBP), as two separate documents. Collectively, the CTP and CBP serve as the City's Trails Network Plan (TNP). The CTP was revised on May 21, 1991, September 16, 1991, and October 26, 1991. The CBP was revised on October 15, 1996.  The TNP has not been updated since the mid-1990's.

Also, in 2008 the city developed a trails plan for the Coast Vision Plan, which is "a modern vision to unify the [city's] coast through design," providing a framework of connectivity of public amenities within and adjacent to the city's coastal zone.

Beginning in 2012, the City undertook the updating and consolidation of all of its existing trails plans and documents into a single, comprehensive Trails Master Plan (TMP). As a part of the preparation of the TMP, the City will conduct outreach to stakeholder groups to refine the scope of the TMP and identify the unique issues of concern to the various constituencies with an interest in trails access and planning in the city. Project stakeholders are expected to include (but not be limited to):

The current Trails Network Plan divides the city into 5 sections or subregions, as depicted on the project area map below. At this time, the City expects that the TNP will be organized in a similar fashion. 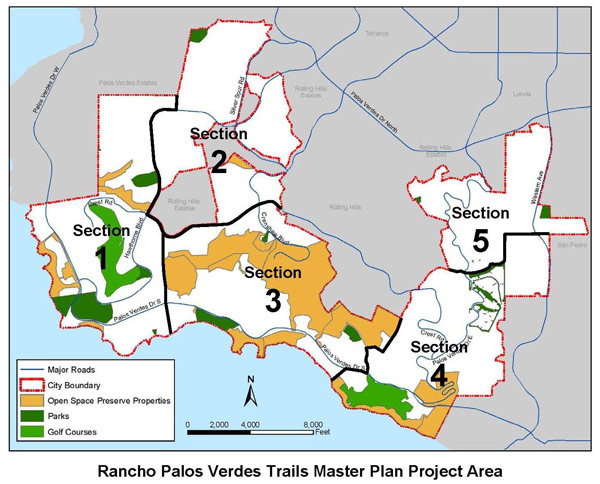 May 17, 2022: The City Council received an update on the project and approved Amendment #2 to the agreement with Alta Planning and Design to complete the Trails Network Plan document.  Click here to view the agenda report.

July 6, 2021: The City Council received an update on the project and approved Amendment #1 to the agreement with Alta Planning and Design to complete the Trails Network Plan document.  Click here to view the agenda report.

November 7, 2012: the City Council provided Staff with policy direction on 4 of the 11 recommendations made by the Open Space Planning Recreation and Parks Task Force related to updating the TNP.  Click here to review the agenda report.

On January 15, 2013, the City Council, in response to public concerns regarding the loss of trail connections between neighboring jurisdictions, directed Staff to monitor and provide quarterly reports to the Council on inter-jurisdictional trail matters. Below are links to the Interjurisdictional Trail Matter Reports.