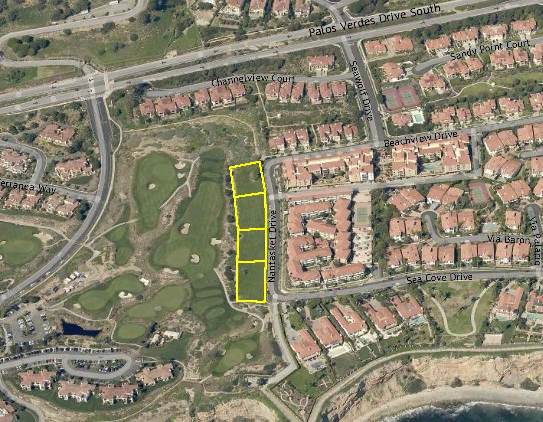 On February 2, 2010, the City Council approved Vesting Tentative Parcel Map No. 69928 along with the related Environmental Assessment, General Plan Amendment, Coastal Specific Plan amendment, Zone Change, Variance, Grading Permit Height Variation, and Coastal Permit to allow, among other things, a subdivision of the existing 1.41-acre parcel into four (4) residential lots with a minimum lot size of 14,000 square feet each.

After completion of several items, including the vacation of a City-owned easement, recordation of a Subdivision Improvement Agreement, and recordation of a Covenant to Hold Harmless (Golf Ball Hold Harmless Agreement), the Final Vesting Parcel Map was approved by the City Council on March 4, 2014 and subsequently recorded on April 7, 2014. Per the City Attorney, this date of recordation becomes the effective date for all the planning entitlements related to the subdivision.  On May 5, 2015, a one-year time extension request was approved by the City Council for Planning Case Nos. ZON2008-00074 through ZON2008-00078, associated with the residential development entitlements for Vesting Parcel Map No. 69928, resulting in a new deadline of April 7, 2016.  The developer then submitted rough grading plans on March 15, 2016 to the Building & Safety Division.   The permits were then reissued on June 7, 2017, as the plan check for the rough grading had expired.

On June 26, 2017, Coastal Development Permit and Site Plan Review Permit applications were submitted to Planning Staff for several ancillary site improvements at 31 and 41 Nantasket, including swimming pools, outdoor kitchens and other yard improvements and the Public Notices were sent out on June 30, 2017. Please view the notice for 31 Nantasket Drive (PDF) and view the notice for 41 Nantasket Drive (PDF). The Coastal Hearing Officer will hold two duly noticed public hearings at City Hall at 10:00am and 10:30am on July 27, 2017, for 31 and 41 Nantasket, respectively.