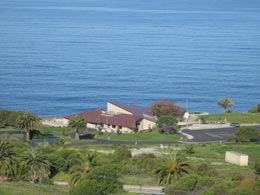 Given this direction, prior to conducting public workshops on this matter, Staff formed a focus group of community stakeholders (including one councilmember) to help develop a base plan that would be presented to the public. Over the past year, the focus group regularly met and has come up with a base plan that intends to strike a balance between the various community stakeholders, complies with the property restrictions, and adheres to various City documents. Prior to vetting the base plan at a future public workshop and at a future City Council meeting, City Staff has requested officials from the National Park Service (NPS) and State Parks to affirm that the base plan for the proposed park improvements at Lower Point Vicente comply with the property's deed restrictions and Program of Utilization. Once the base plan has been affirmed by NPS and State Parks, City Staff will commence with the public outreach process, including conducting public workshops, to receive public comments on the proposed plan prior to presenting the plan to the City Council.

Prior to commencing construction, the City will complete an environmental assessment pursuant to the California Environmental Quality Act (CEQA) for consideration by the Planning Commission along with a revision to the Condition Use Permit, Coastal Permit, and Grading Permit for the PVIC expansion project. More information, including project plans and related documents, will posted on this site when made available.