On December 13, 2017, the Planning Commission certified a Mitigated Negative Declaration and approved a Major Grading Permit and Coastal Development Permit for 6,414 yard³ of after-the-fact grading with 794 yard³ of export to regrade the contours where unpermitted grading occurred over the 5500 Palos Verdes Drive South property and the City-owned Abalone Cove Reserve Property (ZON2017-00115). No appeals were filed and a building permit (GRADE2018-00001) was issued on October 15, 2018. Two tractors have been mobilized on site, and debris fence and erosion control measures were installed. Excavation work will begin as of November 6, 2018 and earth material will be exported off site.

On December 9, 2014, the Planning Commission conditionally approved the conversion of a 2,690 square foot portion of the Harden Estate Gatehouse into the "Heritage Castle Museum". This entitlement was originally set to expire on December 9, 2015, which was extended to December 9, 2016 by the Community Development Director. As the Director may only extend the entitlement one-time, up to a year, the Planning Commission conducted a public hearing on November 29, 2016 and granted an additional 1-year extension to complete the project based on unforeseen hardships in completing the Commission-imposed conditions. The new expiration date is December 9, 2017.

In April 2014, Rancho Palos Verdes residents Dr. Allan Ginsburg and Mrs. Charlotte Ginsburg purchased the 2.06-acre property and buildings. The Ginsburgs propose to convert the gatehouse into the "Heritage Castle Museum" on the property. As described in the Planning applications filed on August 21, 2014 (Planning Case Number ZON2014-00332): We are a non-profit organization and propose to renovate the gatehouse to serve as a historical museum, cultural and educational center that will be open to the public.....We envision using the easterly portion of the gatehouse building as a museum/exhibit space with state-of-the-art display technology. The facility would be available for small, docent-led tours by appointment only. We would also like to make the facility available as an event space serving local non-profit organizations. To the maximum extent possible, we intend to provide off-street parking for visitors on the site. We want to be sure to host events and activities on the site are of an appropriate size and scope so as not to adversely impact our nearest neighbors, including the City's Abalone Cove Shoreline Park. We would also like to work with the City to preserve the rich, historic integrity and significance of the site, including taking advantage of the provisions of the State Historic Building Code during renovations.

On December 9, 2014, the Planning Commission conditionally approved the proposal for what is now being called the "Palos Verdes Heritage Museum." The property owners have yet to meet the conditions of approval to convert the existing residence to a public museum. 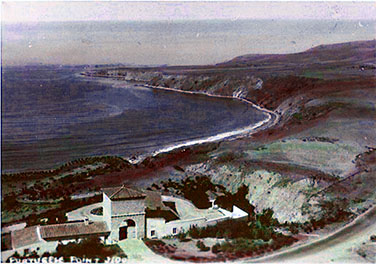 The Harden Estate Gatehouse in the 1930s (looking west)

The Harden Estate gatehouse at 5500 Palos Verdes Drive South is among the oldest remaining structures in the City. Completed in 1929, the gatehouse was intended to serve a much larger estate that the Hardens planned to build on Portuguese Point. Edward Harden and his wife were friends and business associates of Frank and Narcissa Vanderlip (in fact, Mrs. Harden was Mr. Vanderlip's sister). The gatehouse was designed by architect Gordon Kaufmann and the original landscape design was by Frederick Olmstead. Unfortunately, with the stock market crash in 1929, the Hardens were unable to complete their dream estate at Portuguese Point. The Rancho de Los Palos Verdes Historical Society has designated the Harden Estate gatehouse as a local historical site. The property has passed though the hands of only a few private owners over the years. 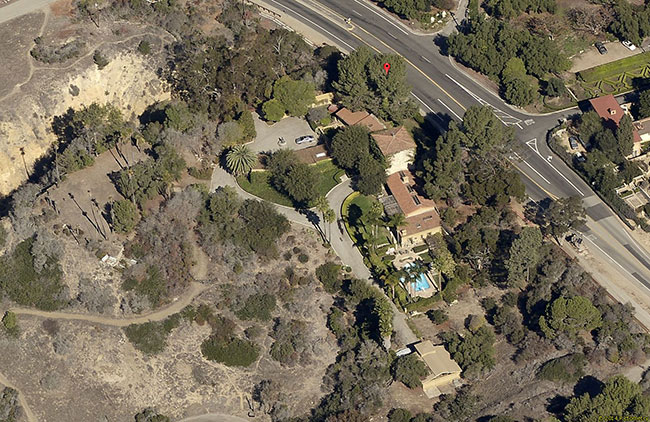